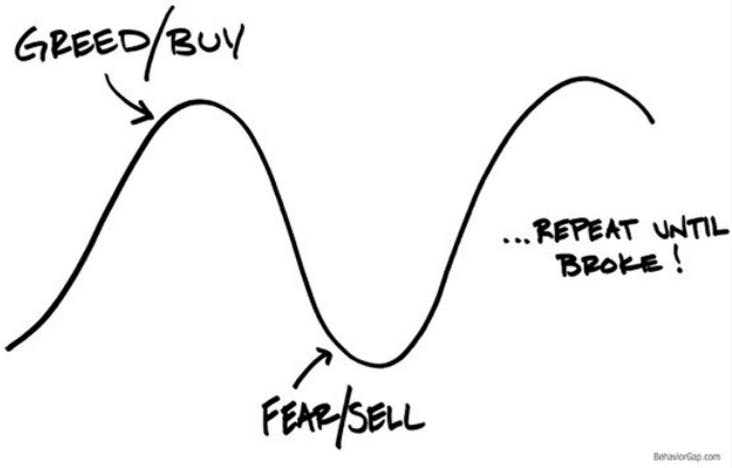 What are you afraid of ?

The current expectations of an economic contraction in early 2023 is a normal economic cycle that has been occurring for over 200 years in the US. Rather than something to be feared, it is something we should expect as normal and part of a healthy reset of our economy.

One way to illustrate this point is to look at the money going into and out of mutual funds. If you remember the late 1990’s and early 2000’s when the dot-com market had reached a fevered pitch. Folks were using their home equity to buy tech stocks right after the NASDAQ had a 1-year return of +80%!

In January 2000, investors put close to $44 billion dollars into stock mutual funds, according to the Investment Company Institute, shattering the previous one-month record of $28.5 billion. Money continued to pour into stock funds through March of 2000, pushing the NASDAQ to 5,000. I’ll bet you can guess what happened next. Over the next 2 years, the NASDAQ lost half of its value (by October 2002).

That same October (at the low for the economic cycle), investors were selling stocks as fast as they could, where was all the money going? Into bond funds, when bond prices were near record highs.

Think about this pattern for a minute. At the top of the market, we can’t buy fast enough. About three years later, at the bottom, we can’t sell fast enough. And we repeat that over and over until we’re broke. No wonder most people are fearful about investing, they are doing it all wrong. This story is repeated over and over, again and again.

“The most important quality for an investor is temperament, not intellect.”

Can you imagine doing this in any other setting? Picture walking into a Ford dealership and saying, “I want a new F150.” The salesperson says, “Oh my gosh, you’re in luck, we just marked them up 30%!” And you say, “Awesome, I’ll take three!”

It is instinctive for us to try and get more of what gives us security and pleasure and run away as fast as we can from things that cause us pain. That behavior has kept us alive as humans for thousands of years. Then there is the phenomenon known as FOMO (fear of missing out). When everyone else is buying we feel anxiety because others are making money on an investment (or making more than we are making). But I’m telling you, this behavior is terrible for us when it comes to investing.

In this famous quote, Buffett reflects on an important fact: humans are naturally irrational. We can expect a large quantity of them in a group to do irrational things. This is why large market swings are often based on the whims of traders.

By rationally learning to work against this status quo, we learn that fighting the urge to follow the herd mentality into a stock will pay off. Meanwhile, running into a trend will often lead to disaster.

Of course, it’s totally normal to feel fear and greed or to be scared when the markets are scary. The fact that you feel those things just means you’re human. It’s okay to feel it. But understand that acting on it will cause financial harm. Do whatever you need to do to not act on fear and greed.

Take a breath, learn to be patient, research, and seek out expert financial guidance when needed.

If you are feeling fearful about the markets, your investments, or your financial future and you do not have a trusted advisor click this LINK to schedule a meeting or call us at 864-862-9269.